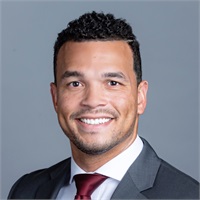 Christopher is a CERTIFIED FINANCIAL PLANNER™. He completed his first two years of college at the United States Air Force Academy, and finished his Bachelor of Business Administration and his MBA at Texas A&M International. During his time in school, Christopher played collegiate basketball and participated in student government. He holds school records for scoring, rebounding, and steals. As the Student-Athlete Advisory President and Graduate Senator Christopher helped pass and implement some of his university's first guidelines to empower student-athletes better.

After graduating, Christopher began his professional career.  He has over 10 years of professional experience. He has worked as a licensed financial advisor with some of the nation's largest financial advisory firms, including Edward Jones, Charles Schwab, and Merrill Lynch. During his time with these firms, Christopher typically helped clients who had already accumulated wealth. He helped them manage their existing wealth and implement strategies to preserve and pass on that wealth to heirs. Christopher has helped hundreds of people manage millions of dollars throughout his career. Nevertheless, during his time working with big financial firms, there was a consistent dilemma; the firm's needs were not quite in alignment with the needs of the client. Too often, Christopher was expected to sell product-based instead of offering true fiduciary financial planning advice. That shortcoming is what has led to the creation of Swan Capital Financial Planning and collaboration with RTB Financial Group.

Outside of helping people manage their money and grow their wealth, Christopher enjoys adventures with his wife Dakota, their one-year-old son Topher, and their dog Solange. He spends free time watching/playing basketball, working out, reading, and enjoying time with close family & friends.